Further properties administered by the Bavarian Palace Administration in the Nuremberg area are Cadolzburg Castle and the Rothenberg Fortress Ruins: 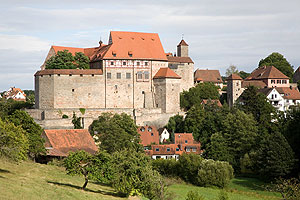 The main castle, perched on a steep rocky spur, is surrounded by an imposing ring wall, which like the main gate and Palas (part of the New Building) dates from the 13th century. Outside the ring wall is a spacious bailey, where the Burgmannen originally resided and which in the Renaissance period became a garden.

At the end of the Second World War the castle went up in flames and remained a ruin for decades. Over the last few decades the Bavarian Palace Administration has secured the site and the building substance. Cadolzburg Castle today houses the exhibition “A castle and its lords. The Cadolzburg experience” with an exhibition area of around 1,500 m², which provides an entertaining and exciting encounter with the Middle Ages. Visitors are able to see, hear, smell and feel what it was like to live at the castle in the late medieval period and gain an immediate impression of the past.

A medieval castle originally stood on the site of the baroque fortress: a Hilpold von Rothenberg was mentioned for the first time in 1254. Rothenberg was later owned by the burgraves of Nuremberg, followed by Emperor Karl IV, who as King of Bohemia thus acquired a new outpost. In 1401 King Ruprecht took the castle from King Wenceslas in Bohemia. 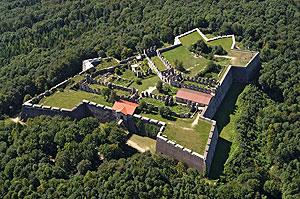 During the Thirty Years' War, the castle was occupied by Bavarian troops, posing a considerable threat to the free Protestant city of Nuremberg. In the Spanish War of Succession, the now heavily fortified castle was taken in 1703 by the imperial troops and completely destroyed. After the peace treaty of 1714, Elector Max Emanuel rebuilt it as an even more powerful fortress, which proved its worth in the Austrian War of Succession when it withstood an attack by the Austrian army. After the Napoleonic Wars the fortress declined in importance, and in 1841 was abandoned and fell into ruin.

In 1966 the ruined fortress passed to the Bavarian Palace Administration, which is now taking steps to prevent its further decline; the Schnaittach bastion is being made accessible as a viewing platform and a large part of the massive casemates will be opened up for guided tours.